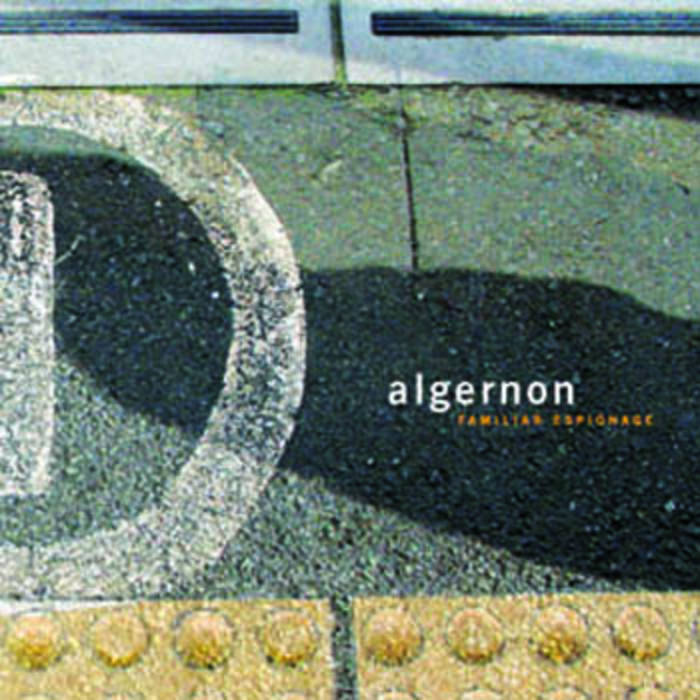 “... The young Chicago quintet...has the instrumentation of something close to a jazz combo... The tunes, all written by twentysomething guitar wünderkind Dave Miller, flutter and bob in surprising patterns, taking advantage of a palate that‘s unquestionably Blue Note–worthy.
And yet... Algernon isn‘t that far from the land of rawk. ...
...toying with the rock versus jazz dichotomy...Tortoise has been challenging its listeners in much the same way... ...before that, Weather Report...and Mahavishnu Orchestra... ...this jazz-rock mind-melt isn‘t post-rock but pre-, an homage of sorts to an era when jazz chops meant something in rock circles (King Crimson, Frank Zappa). But on Espionage, Algernon tweaks the Tortoise model in its own distinct way, opting for hooks over ambience. ...Katie Wiegman, on vibraphone and glockenspiel...gives the group a magical air.”

“...neopsychedelicpostrockjazz? ... It's the kind of music that is made by Algernon... Familiar Espionage is an all instrumental journey through feedback, blink-and-you-miss-them Beatles melodies, Zappa-inspired vibes, heavy metal outbursts and left field Syd Barrett weirdness. It's that good.”

“... Miller...has built this unusual quintet into a sleek roadster, using Katie Wiegman‘s vibraphone to lighten and brighten the sound of the two-stroke jazz-rock engine—Miller and Nick Fryer, both on guitar—that powers the band. Miller draws from jazz and rock (prog, psych, and post-) but also aspires to a kind of latter-day chamber music: tautly composed lines and detailed, surprisingly delicate arrangements butt up against raucous free improvisation and splashy electronics. On Familiar Espionage...the tunes...have a definite post-rock feel, but Miller pushes them into jazzier territory...while avoiding anything that sounds like a traditional jazz solo.”

“... Between the grooves, the bombast, the white noise and the terrific writing, Algernon has come up with a winning album. ...jazz-rock fusion in the most equitable sense... this is jazz guys playing something that splits jazz and rock right down the middle. As much as Familiar Espionage might owe to the grooves on Grant Green's Alive or the power on John Coltrane's Meditations, it also seems to pull just as much from Tortoise's Millions Now Living Will Never Die or My Bloody Valentine's Loveless.
...for jazz fans that have appreciated...Craig Taborn, Matthew Shipp, Dave Douglas' Witness or Happy Apple, you're in for quite a treat.
As a review writer for a jazz magazine and as a music director for a jazz radio station, I get an awful lot of CDs... it's pretty rare that something stays in the CD changer too long. Familiar Espionage has been in there for the past month. ...”

“... Algernon...bring together elements of rock and jazz and combine that with a love for twisting textures, soundscapes, and semi-confusing time signatures. ... They do this with a drums, bass, two guitar set-up, but also add to this a vibraphone and glockenspiel... ...they create sounds that can sound frightful, eerie, and overly exciting at the same time, at times sounding more like a classical string quartet raised on punk than an average rock band who only know about 4 on the floor. ...
Those who find interest in the wordless sonics of 65daysofstatic will find Algernon a band worth looking into. While both bands are completely different in sound, they both share respect towards taking their music to whatever direction it leads them.”

“... Algernon‘s jazz roots ring clear, but in an edgy way that hooks past dozens of surprise sharp turns before each song‘s story reaches a close. This music isn‘t afraid to step outside of the cake-and-tea/elevator-song stereotype to which post-college jazz seems so constantly vulnerable... Algernon is a rock band whose guitar-and-vibraphone plot twists relish in static climaxes and bass that quivers for days. It‘s a layered, space-age soundtrack for postmodern groove. ...”

“Algernon is one of those bands on the Ears & Eyes label that is pushing the boundaries of rock and jazz (and more) to the perimeters. They obviously don't care if it can be pegged to a genre, they only care if it's good, and it is!
Comprised of two guitarists, Dave Miller and Nick Fryer who work their interlocking lines like they've been listening to as much Gang of Four as Grant Green. ... Driven by a rocking rhythm section of bassist Tom Perona and drummer Cory Healey, the music is given an ethereal shine by shimmering guitar electronics and the presence of Katie Wiegman's heavenly vibes and glockenspiel. ...
...Algernon...have crafted a unique and highly entertaining sound. ...the guitarists utilize an advanced palette of chords, which adds to the jazzy feel. Strange noises merge into beauty and then the rhythm section kicks in with one of their patented riffs and all bets are off. ...it almost sounds as if avant garde composer Messaein were playing Delta blues, but the spacey free form outbursts contain enough substance to entertain and the more composed elements...are actually quite lovely and dare I say, "catchy."
...the guitars and vibes dance and float over the hard charging rhythm section. Perona pushes the band along with Healey, while his bass lines comprise another important harmonic element
that intertwines with and sometimes takes the lead on the melodic structure...
...the nasty distortion of effects-laden guitars...will satisfy those looking something new and different. Algernon are to be commended, as are Ears & Eyes Records, for doing their part to ensure Chicago remains the center of the experimental jazz/ music universe.”

“... Where the band might lead you to believe you might be listening to jazz because the music is instrumental, it's really anything but as it delves into everything from indie to hard rock. ...it's all good...” – Theft Liable to Prosecution, April 2008

All compositions written by Dave Miller

A truly unique musical product of both Brooklyn and Chicago, Dave Miller, who "plays with refined restraint of someone twice his age" (Time Out), has once again redefined his parameters with the improvisational psych-folk of "Old Door Phantoms". Out 4/1/16 on ears&eyes Records with a national tour to support! ... more

Bandcamp Daily  your guide to the world of Bandcamp

Benji B talks about his new compilation ‘Deviation Classics’